When people see steam mops in shops or on telly they think two things. The first is ‘well that looks handy’. The second is always, ‘but do they work?’

Steam mops were introduced to the British mass market in 2004, having been originally created by Romi Haan. Although they’ve been selling well in the UK, there’s still a lingering doubt about their efficacy in many people’s minds.

How Do Steam Mops Work? 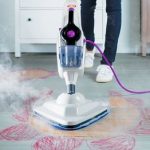 A steam mop, as its name implies, works by using steam to clean and disinfect surfaces. Said steam then soaks a microfiber pad attached underneath, which in turn helps make dust and minor stains a thing of the past. Due to the high temperature, they are also great for disinfecting surfaces, killing up to 99% of bacteria and dust mites.

So Do Steam Mops Work?

The short answer: Yes, depending on the type of task you use it for.

They are NOT high-tech mops. Your old mop was great for soaking up big puddles. This is the misconception behind this preposterous video. They don’t realise that the purpose of a steam mop is to clean and disinfect, not soak up huge amounts of liquids!

This video is two minutes and 4 seconds of nonsense. I LOVE LOVE LOVE my Shark steamer. First of all….. if you spill something like ketchup or syrup on the floor you wipe it up IMMEDIATELY with a PAPER TOWEL first, THEN you can go over it with a mop OR steamer. You don’t wait until the next day when its all dried up then try to do a quick clean up by going over it with a mop or steamer! That’s just pure laziness. If you keep a clean home the steam mop is a dream come true because it makes upkeep of your home so simple and quick. You don’t have to worry about wringing out the mop several times in hot dirty water and instead of scrubbing the hard to reach places all you have to do it put on the attachments, steam it, and wipe it.

Steam mops work quite well when it comes to minor stains and microbes, but they’re not exactly ideal for cleaning larger messes. One would generally want to wipe most of the larger stain with a paper towel before actually using a steam mop to get rid of the smaller, stubborn stains.

However, a small warning is definitely due. The heated steam is more than capable of scalding skin, which is why we would advise everyone to keep that in mind and refrain from being reckless when using a steam mop.

Despite their inability to take care of massive messes by nature, steam mops work surprisingly well when it comes to finishing the job and leaving a spotless floor behind them. They can be relied on for a perfect finish.